The things I write about

This Ashtami, here’s presenting the recipe for Kasi Halwa, a popular sweet treat in South India. It is a common part of the banana-leaf meals at South Indian weddings, poojas and other auspicious occasions. Belying its name, Kasi Halwa has nothing to do with the holy town of Kashi – the name probably comes from the Kashi Phal, the Hindi name for white pumpkin, from which the dessert is made. Now, don’t baulk, the halwa tastes absolutely delicious! 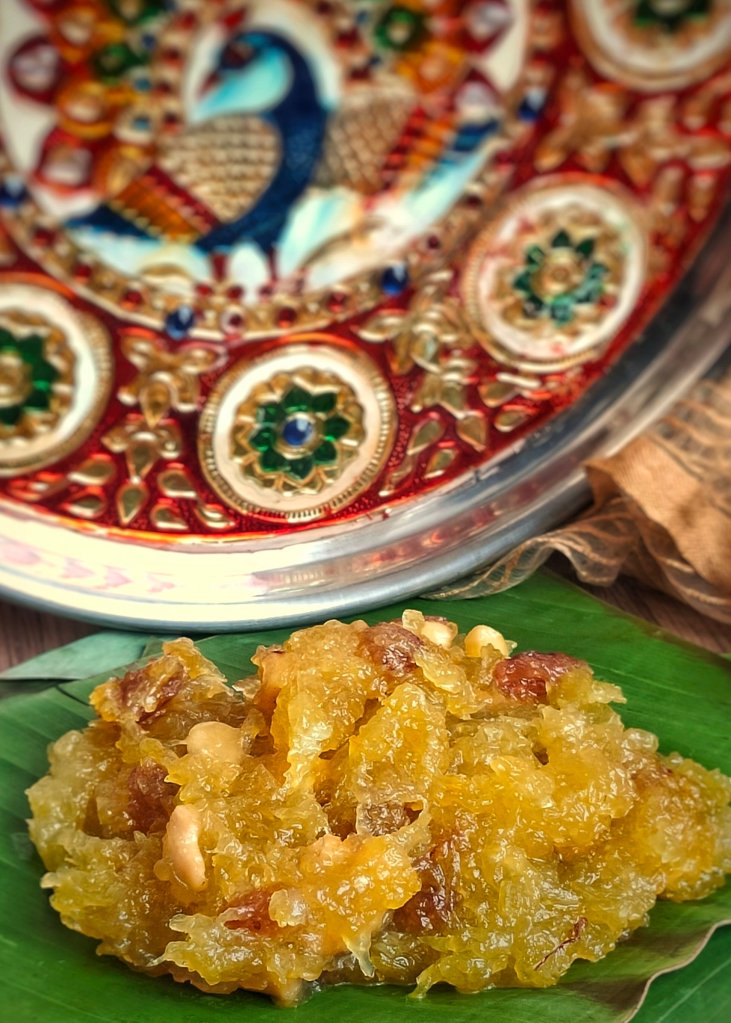 Of Kasi Halwa and fond memories

My first introduction to Kasi Halwa was at the engagement ceremony of one of my cousins, years ago. The ceremony was in Madras, and my parents and I were visiting from Ahmedabad. My love of food in general and my sweet tooth are legendary in my family, and a whispered ‘There’s Kasi Halwa on the lunch menu. You’re so going to love it!,’ was one of the first things I heard when we landed in Madras. It was my aunt, the in-charge of the menu for the ceremony.

I had no inkling of what exactly Kasi Halwa was before that. At lunch, a big glob of hot-hot-hot ghee-dripping orange goodness was placed on my banana leaf. The Kasi Halwa had arrived. True to my aunt’s words, I absolutely adored it. It was so, so delicious a confection I was hooked right from the first bite. Never could I guess that the lovely thing was made from something as humble as white pumpkin, poosanikkai in Tamil!

Now, my aunt is the sort of person who, if she loves something at a wedding, has no qualms about going ahead and asking the chef for the recipe. She did just that for the brilliant Kasi Halwa, and the cook was sweet enough to oblige. I was surprised to learn from her just how simple a dessert it was to prepare, requiring very few basic ingredients. The cook taught us some very useful tips and tricks to get Kasi Halwa right, and that’s how we make it at home ever since, minus the orange food colouring. Till date, it remains a favourite with everyone at home.

How to make Kasi Halwa

1. Remove the skin and seeds from the pumpkin. Grate it medium thick. I had about 1-1/2 cups pumpkin when grated, including some water that released from it.

2. Heat 1 tablespoon of ghee in a heavy-bottomed pan. Add in the grated pumpkin, along with the water from it. Mix well. Saute the pumpkin in the ghee for about a minute.

3. Now, close the pan and allow the pumpkin to cook on medium flame till it is completely cooked and all the water has evaporated. This can take 10-12 minutes. You will need to uncover the pan intermittently to check on the pumpkin. In between, if the water has dried out, add a little regular water or milk to cook the pumpkin in.

4. When the pumpkin is completely cooked, add the sugar to the pan. All the water should have dried out at this point. Keep the flame still at medium.

5. Add in the saffron threads too. Mix well. The mixture will release water once the sugar is added in – don’t worry about it.

6. Continue to cook on medium flame, uncovered, till the water dries out and the mixture thickens. This should take 3-4 more minutes. Stir intermittently.

7. While the mixture is cooking, chop up the cashewnuts roughly. Heat the remaining 1 tablespoon ghee in a small pan. Turn the flame down to medium, and add in the chopped cashewnuts and the raisins. Let the raisins plump up and the cashewnuts turn slightly brown. Take care to ensure that they do not burn. Add the ghee, cashewnuts and raisins to the pumpkin mixture cooking in the other pan. Mix well.

8. The Kasi Halwa is done when it has thickened considerably. Switch off the gas when the mixture is still a bit runny. Remember that it thickens up further upon cooling. Serve hot, warm or chilled.

1. Make sure the hard skin, fibre and seeds are completely removed from the pumpkin. Grate it medium-thick, for best results.

2. I have used regular refined sugar here. Adjust the amount of sugar you use, as per personal taste preferences.

3. Cardamom powder can be added to the Kasi Halwa for flavouring. We don’t.

4. Make sure you use a heavy-bottomed pan to cook the Kasi Halwa.

5. White pumpkin leaves a lot of water while grating. Some people squeeze out the water from the pumpkin, before using it to make the halwa. I don’t. Rather, I cook the grated pumpkin in the water it releases.

6. It is important to uncover the pan intermittently and check on the pumpkin, while it is cooking. Usually the water released from the pumpkin is enough to cook it. However if the water dries out and the pumpkin is still uncooked, you can add in some regular water or milk. This will help cook the pumpkin completely.

7. Add in the sugar only after the pumpkin is completely cooked. This is important. If you add the sugar beforehand, the pumpkin might not get fully cooked.

9. The mixture will let out some water once the sugar is added in. Do not worry about this. It will soon start to thicken up.

10. Stop cooking the halwa when it is still somewhat runny. It will thicken up quite a bit on cooling.

11. Don’t skimp on the ghee. This halwa is supposed to be dripping with ghee.

Did you like the recipe? Do tell me, in your comments!